One of our most popular questions here at Skydive Interlaken is about safety. For a first time skydiver, jumping from a helicopter and freefalling from 14,000ft can seem out of control! But it is quite the opposite. Statistics show us that a person is more likely to win the lottery or get struck by lightening than die from a tandem skydive. If we still haven’t convinced you, then read below the 5 reasons why skydiving is safe for you. 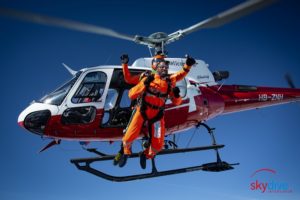 The first recorded free fall jump is credited to Leslie Irvin in 1919 and the earliest competitive skydives date back to the 1930’s. Skydiving became much more mainstream once the military began developing parachute technology and used the act of skydiving as a tactical move during World War II. The sport has come a long way since the days of military jumping with round parachutes where the wind would determine where you would land!

The tandem equipment that is used today for skydiving has been continuously developed and improved for over 40 years. One of the most important safety innovations considered in skydiving was the invention of a life saving device called the AAD which brings us to our next point.

As mentioned above, the invention of the AAD is recognized as the most important of these safety innovations in skydiving history. An AAD (automatic activation device), is a small device which monitors air pressure and speed and when things are not going to plan (you don’t have a parachute open at a certain altitude), this device will immediately release the reserve parachute. Having an AAD means that it is not possible for anyone to not impact the ground without a parachute.

Skydiving tandem instructors have to be put through intensive training before getting qualified. In Switzerland the regulations are high and Skydive Interlaken is an official member of the Swiss Skydive Federation. 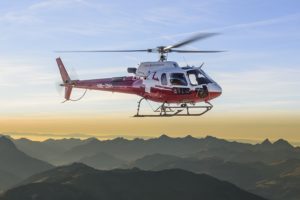 Helicopter flying is extremely safe, especially in Switzerland. This is due to the amount of hours pilots fly, in and around obstacles with long lines collecting supplies, grass and even sometimes cows!

Skydive Interlaken is part of the Swiss Skydive Federation which means we have certain standards to keep up with and are audited regularly. We believe this is important for the safety of both our instructors and passengers. If you want to know more about the Swiss Federation you can check out their website here.

June 30, 2022 6 reasons why Switzerland is a top destination to go skydiving in Europe

Switzerland is a country that offers fantastic views and incredible locations. Known for being a destination where you can breathe in the clear mountain air, enjoy beautiful views, and try different activities.

Read More
May 7, 2020 Important information about the coronavirus and the measures taken by Skydive Interlaken

With an excellent protection concept and strict protective measures, we’re happy to announce that we will reopen on May 11th, 2020. Read more about how we will operate.

Outline of the current Coronavirus situation in Switzerland and some advice on travelling around the country during this sensitive time.